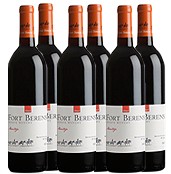 We are excited to offer our Discovery Club members the opportunity to purchase a special vertical library of our 90+ point Meritage wines. All 6 bottles for the special price of $203.95 (including discount, excluding tax and shipping).

Features aromas of black currant, cherry and spices. Well-structured with elegant tannins and a long, lingering finish. Pairs well with BBQ steak, roast beef and aged cheeses. A blend of 47% Merlot, 34% Cabernet Sauvignon and 19% Cabernet Franc and aged in French and American oak barrels. The blend features fruit from our Estate vineyard in Lillooet and from Sundial Vineyard in Oliver.

91 points: John Schreiner (2013): "The wine is 47% Merlot, 34% Cabernet Sauvignon and 19% Cabernet Franc. It was aged 12 months in French and American oak barrels and another six months in bottle before release. Dark in colour, it begins with an appealing aroma of black cherry, black currant and vanilla. On the palate, the wine’s long ripe tannins give it a generous richness. The flavours echo the aroma with added touches of chocolate and spice."

Aromas are of dark roses, chocolate, and sage, with hints of summer cherries and black currants. Best enjoyed with game meats, roasts, or aged cheeses. The blend features grapes from our Estate vineyard in Lillooet (40%) and from Sundial Vineyard in Oliver. A blend of 72% Merlot, 18% Cabernet Sauvignon and 10% Cabernet Franc, aged in French and American oak barrels for 12 months. The final blending was done in the fall of 2013. We were fortunate to be able to select among a large number of different lots in our cellar, with different grape varieties, vineyard lots and barrel types. Our goal was to highlight the layers of complexity while finding harmony in the aromas. After bottling on November 25th 2013, it was aged another 9 months prior to release.

Aromas of black currant and grilled red peppers with a silky texture, firm tannins, and a lengthy finish. Ideal for roasts and late nights. This Meritage contains a beautiful blend of Merlot, Cabernet Sauvignon and Cabernet Franc grapes. Each varietal was fermented separately in small batches and then aged in French and American oak barrels for nine months. After the cellaring period, the wine was assessed. We then selected the best batches for the blend. Our 2013 Meritage was bottled and aged for an additional eleven months prior to release.