“Two roads diverged in a wood, and I, I took the one less traveled by, and that has made all the difference”.
- Robert Frost 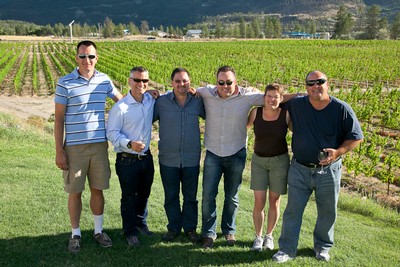 Fort Berens Estate Winery is a culmination of the dreams, vision and pioneering spirit of several entrepreneurs. It was founded with a pioneering spirit and forged on the road less traveled. The winery is owned by a team of eight individuals who share a common belief in the incredible winemaking potential of British Columbia’s Fraser Canyon and a shared vision to make Fort Berens into one of Canada’s leading producers of fine wine.

Founding partners Rolf de Bruin and Heleen Pannekoek initiated the venture with a search for suitable land and a dream that was to become Fort Berens. The pair emigrated from Holland and settled in Lillooet, British Columbia, with their young family in 2009 to establish Lillooet’s first commercial vineyard.

Soon after planting the vineyard, Rolf and Heleen welcomed retired executive, Hugh Agro, corporate director, Sean Harvey, investment banker, Jason Neal, and mining executive John McConnell into the business. These four new partners helped to purchase the estate’s 65-acre property, build a commercial scale winery and retail operation and execute on developing Fort Berens into the business that it is today. Investment banker, Dan Barnholden and mining executive Patrick Downey, later joined as the seventh and eighth partners. Raymond Rae, an executive and leader in the building automation industry, joined the team in 2018.

Hugh first visited Lillooet more than twenty years ago and although he has lived and worked in many places around the world since then, he always finds his way back to Canada's "hot spot".  Hugh met Rolf and Heleen when Fort Berens was just getting off the ground.  A like-minded pioneer by nature and an early backer of several new business ventures in the past, Hugh joined with the founders to fund and help build the business. Hugh is a big believer in Lillooet’s long-term agri-tourism potential and is Fort Berens’ largest shareholder. His passion for making Fort Berens a success is matched only by his love of Lillooet’s striking scenery, desert-like climate and gentle pine-scented breezes.

Dan's family roots in BC’s interior trace back several generations and include family in Lillooet. A recent addition to Fort Berens' ownership team, Dan resides in Vancouver where he heads up PI Financial's Investment Banking practice. A good friend and long-time business associate of several of the owners, Dan’s personal integrity and high standards of performance set the bar high for Fort Berens’ next phase of growth.

Armed with 15 years of management consulting expertise and proven experience helping other businesses improve their performance, Rolf de Bruin pursued his own dreams to become an entrepreneur. With his wife Heleen, they moved from Holland to BC, eventually choosing Lillooet to plant and grow their own dreams, in the form of a vineyard and winery. A hiker, a camper and an outdoor enthusiast, Rolf is passionate about the Lillooet terroir and the connection to the land with the wine, the wine to the people and the people to the land.  On a day-to-day basis, Rolf helps lead the Fort Berens team by example and by inspiration. He also manages the sales and marketing for the business.

Paddy’s quick wit and boisterous spirit make for lively times at the winery when this owner is in the house! Another recent addition to Fort Berens’ ownership team, Patrick resides in Vancouver and has had a long and successful career in the global mining industry. Welcomed for his comradery and infectious energy, Fort Berens’ guests and patrons can expect to see a lot of Patrick at the winery in Lillooet and in the nearby town of Whistler where he frequently skies and cycles.

Sean's passion for wine is legendary on Bay Street where he made his reputation as a formidable investment banker, mining executive and corporate director. A world traveler, Sean thrives on lively conversation and roars of laughter. Whether in the boardroom or on the dock enjoying a fine glass of wine, Sean calls them as he sees them.

If it weren't for his day job as the President and CEO of Victoria Gold Corp., John might very well be found pruning the vines and harvesting grapes at Fort Berens with is wife Tara by his side! A mining engineer by training, John has spent a good deal of his career living and working in the remote north and is currently building the eagle mine in Yukon. Tara is a geotechnical engineer, who is currently the CEO of Banyan Gold. John & Tara currently resides in BC, but their true home is where their hearts are in the Yukon.  They have a special warmth and appreciation for the community of Lillooet and the fine people that craft our wines.

Jason resides in Toronto where he is President and Chief Executive Officer of TMAC Resources, which is the operator of the northernmost commercial gold mine in the world. Jason left his role as Co-Head of BMO Capital Markets’ Metals and Mining practice, after 21 years with BMO in investment banking, in early 2018 to take on the new challenge of leading this mining company with Nunavut-based operations. Jason is a strategic thinker who has served as an advisor and financier to many of the world’s leading mining companies, leading many industry-defining mergers & acquisitions transactions and capital raisings. The passion Jason brings to the mining industry is also shared with Fort Berens as the winery charts its own growth. A keen supporter since first becoming involved in 2010, Jason brings to Fort Berens his business acumen and a special fondness for our reds.

Jason’s father Bob Neal is retired and lives in Maple Ridge, British Columbia. Jason, Bob and family look forward to a couple bottles of Fort Berens decanted on the dinner table at the holidays or family milestones.

Raised in a family that nurtured her interest in fine wine and cuisine, Heleen has always been intrigued by exploring and seeking new adventures. With a 15-year background as a banker for small and medium-sized businesses, Heleen leveraged that expertise to pursue her own entrepreneurial dreams alongside her husband Rolf. Heleen helps lead the Fort Berens team on a day-to-day basis with both kindness and strength. She is the glue that keeps the team and the business together. She can be found working in the vineyard getting dirt under her fingernails, leading a winemaker’s dinner at a high-end restaurant or doing a tasting at the local liquor store.

Raymond heeded the call of go west young man many years ago as he set out from his native Saskatchewan to make his mark in BC and eventually on the world.  Raymond was co-founder in several highly successful global businesses focussed on Environmental Control of commercial buildings. Raymond pursues his two greatest passions, business and wine with great enthusiasm. The pairing of great wine and like-minded business partners at Fort Berens is a great match.